Creating connected neighborhoods of Next Door. I'm one of the co-founders of next-door, I actually just walked over from our office, which is just a block and a half away in this same neighborhood, and I'd like to just go back and tell you a little bit about what inspired us to start next door.

The background of the foundation of  Next Door

Next door is the free private social network for neighborhoods that helps neighbors talk to each other about the issues that matter. When we started next-door we were trying to solve some of the problems that we were each facing in our own communities. 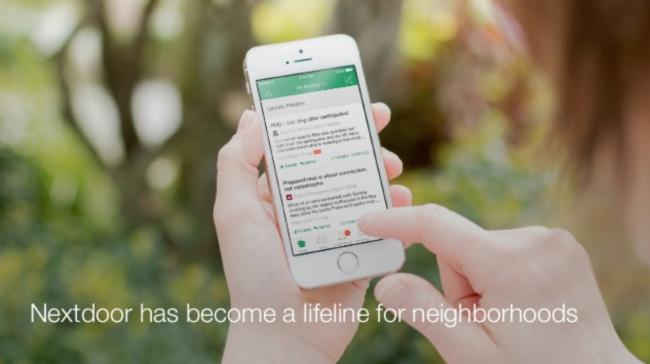 Connected in many ways thanks to technology

When we looked at this we thought that there was something very important that was missing, what about that part of our lives? That's closest to home, the places where we live, where our kids go to school, the places that are really our neighborhoods. For many of us, we would go outside and not even know the people who lived right next door. For me personally, I had over a thousand friends on Facebook, I had hundreds of followers on Twitter, lots of connections on LinkedIn.

And yet I knew one person who lived on my block in San Francisco, and something that you're told if you live in San Francisco is that you have to be prepared to live on your own for 72 hours and take care of yourself in the event of an emergency like an earthquake, and yet here I was connected in so many ways thanks to technology.

And yet I didn't know anyone on my street, it turns out that I'm not alone, it turns out that most Americans actually don't really know their neighbors, this stat from Pew Research that was done in 2010. I think really summarizes it, 28% of Americans know none of their neighbors by name, this is a stat that has been on a steady decline over the for the last 30 or 40 years. Thanks to the fact that you have more people commuting, more parents both parents working outside, the home people just feel disconnected, and in some respects, even technology has contributed to this.

Make it easier for people to start the conversation

We looked at this and we said we actually think that technology can help reverse, this technology can actually help lower the barriers and make it easier for people to start the conversation with their neighbors, and we wanted to bring back the sense of community to the neighborhood. We took an entire year to understand this and many of you probably know lots of people have tried to do this and many have failed.

When we went out and talked to people, what we learned is that while they wanted an easy way to communicate with their neighbors they didn't want to give up all of their privacy. With next-door, we have a defined area that is your neighborhood, and you have to verify that you live within that boundary in order to join. This is essential to creating that trusted environment where you're going to build an enduring community.

Make sure that it felt local

Be public and grown of Next Door 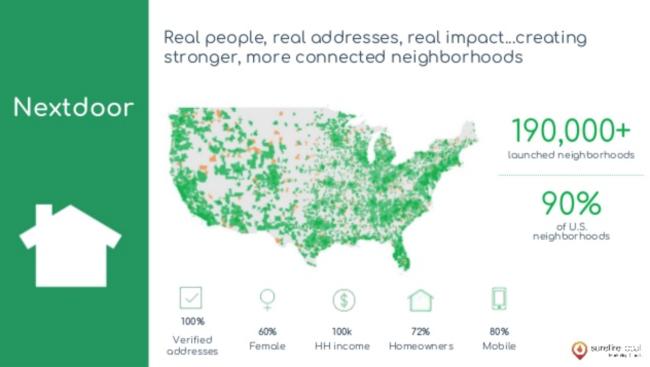 We obviously started with a focus on helping neighbors talk to each other and creating that trusted environment where they could build community, and get to know each other, and talk about the issues that matter, and over time that worked very well. You can see the wide range of things that people found that their neighbors could be very very helpful about.

But something happened about a year after we had launched, we increasingly started to get members coming to us saying this is great but we want to have a way to be able to include some of our local officials in this conversation. I actually had someone in Orinda come to me and say I want to get the fire warden to pretend as he lives at my house, so he can be part of this conversation.

That actually was not the way we wanted people to use next-door, we wanted to create a platform that they could use to post important updates to their residents, and do it in a trusted way without violating the privacy of the neighbors themselves, and you can just look at some of the examples of what people wanted to hear from their local officials. They wanted to get these important updates about what was happening, and they wanted to be able to have a dialogue about it with their local agencies at the same time.

Allow these public agencies to participate in Next Door

When we reached out with these local agencies and we asked them, they said look we've got the limited budget, we have limited personnel and yet we really do want to partner with citizens to create better communities. Fortunately, we could help and we launched a platform that would allow these public agencies to participate in the next door conversations.

This is just an example of what it looks like and it looks like a social network, and I'll just go ahead and play it a little bit forward here. A city official can go in creating a post, they can send that post to the entire city or individual neighborhoods, they can categorize that post, they can add additional information. In this case, a flyer and they can broadcast that information out to the residents, they can also broadcast it on other platforms, on other social media.

Allow interacting with some of the leaders

I think one of the most important things is that not only they having the conversation and posting the information, but they can hear back from residents, they can get feedback was that useful or is their information that can be provided. We also give them a way to be able to track what's going on in their communities and a way to be able to also interact with some of the leaders in these different neighborhood communities across their city.

One of the things that are probably most important about this is that residents are verified before they can join next door, so public officials and staff members can know that they're talking to real verified members of that community.

These are not folks that are simply following your Twitter feed or following you on facebook, these are verified, residents, and that allows for a different level of discussion to really happen when you look forward, and you talk to some of the people who have used next door and have rolled it out across their city.

There are three main themes that really come up.

Invest in building community with residents

First and foremost, they appreciate that Next Door makes it possible for them to invest in building community with their residents, and for example, not too far from here in Oakland we were approached about six months ago by the police department saying.

They wanted to have a platform where they could have an ongoing dialogue with residents in non-emergency situations, they wanted to personalize the police department and help rebuild trust in their community.

They launched with next-door in April and they've been delighted with the response and the amount of support that they've gotten from the Oakland community from residents who now know that they can put a name and a face to some of the officers that helped them.

The second thing that really has come up is crime prevention. Next door has really become like a virtual private watch for the police department and for residents in places like San Diego. They've tripled the number of people in their city that are involved in neighborhood watch and have seen a decrease in crime in places like Sacramento that use next-door.

They've actually tracked a seven point seven decrease in crime since the launch of next door. A year ago, these are hard facts about how people are using next-door to help them create a dialogue to learn about crime and hopefully prevent it.

The third one is really around disaster preparedness, and unfortunately, in the Bay Area, we were reminded of this, just a month ago there was the Napa earthquake and we were all woken up at 3:20 in the morning, guess what happened? People went to the next door and started sharing information where was the quake.

What happened in your area safe but in addition to that the City of Napa, the city of American Canyon, the city of Vallejo which were closest to where the epicenter was they used next-door as a way to send important updates to their residents in the hours days and weeks following the earthquake. Many of you already know this, but neighborhoods and communities where people know each other, those are the most resilient when there is an actual disaster and having a platform that encourages these conversations will help make our cities safer.

Allow any city across the country to come in

One of the things that have also happened is that with the growth of mobile technology we've been able to use our applications for iPhone and Android to help create a lifeline to your neighborhood, no matter where you are, this is especially important in times when there is a disaster.

As I mentioned to you, hundreds of cities have already adopted next-door and they're using it in a wide ray of use cases, I won't go into calling them all out here, but here are some of the most progressive and innovative ones that we've worked with to date. And in the last couple of months, we've started to build out the platform that would allow any city across the country to come in and start using next-door to connect with their neighbors.

Committed residents to improve their community

The last thing I'll just leave you with is one of the things that I think we've really walked away from, after the last three or four years of building out, next-door is how strong and how committed residents are to improving their community.

They want an easy way to engage with local officials, and often their local officials that are doing great work that most residents don't know about. What we're most proud of is that next door becomes a platform where local officials can highlight the work that they're doing, and local residents can become more engaged and become partners in improving their community.

They're not apathetic, it's not that they don't care, they just wanted an easier way to connect with their local officials. I encourage you to go, I'll check out next door and try it out in your city.

How to change the neighborhood boundary: How-to-change-the-neighborhood-boundary

How to change Nearby Neighborhoods: https://help.nextdoor.com/s/article/How-to-change-Nearby-Neighborhoods